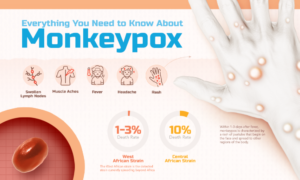 The world was alerted to a verified incidence of monkeypox in the United Kingdom on May 7, 2022. Since then, cases have shown up all across the world, from Sweden and Australia to the United States and Canada. The World Health Organization (WHO) reported 92 confirmed (and 28 suspected) cases of monkeypox in 12 countries where the illness is not generally found as of May 21. WHO is collaborating with these and other countries to increase surveillance and provide guidelines on how to monitor and manage outbreaks. But what is monkeypox, and should we be worried about the latest virus to make the news?

Monkeypox was initially detected in 1958 in monkeys maintained for research in the Democratic Republic of the Congo. It is endemic to Central and West Africa (DRC). Since then, cases have been reported in Africa and beyond, including Singapore, the United Kingdom, Israel, and the United States. The majority of infections occur in persons who reside in, travel to, or come into contact with humans or animals from endemic areas.

The globe is still dealing with the COVID-19 pandemic, so the potential of another breakout is concerning. The good news is that, unlike COVID-19 in early 2020, scientists already have a lot of information regarding monkeypox. This article covers our current knowledge of monkeypox, including preventive, immunization, and treatment options, as well as unanswered questions. 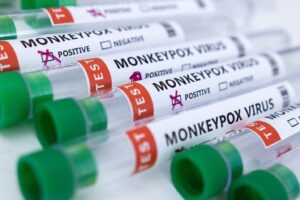 Despite its name, monkeys are not the primary reservoir of the monkeypox virus, which is the disease’s causative agent. Rather, the virus is thought to be primarily found in rodents such as squirrels and rats. When a person comes into touch with an infected animal, person, or contaminated items, the monkeypox virus is transmitted to and between humans. The virus can enter the body through broken skin (even wounds that aren’t visible to the human eye) or big respiratory droplets that enter through the mouth, nose, or eyes.

Surprisingly, instances of monkeypox have been concentrated in men who have sex with men during the May 2022 outbreak. To far, it is uncertain if monkeypox may be spread especially through sexual transmission methods, and this is still being investigated. Despite this, the rise of monkeypox in non-endemic regions has prompted some to speculate that, like SARS-CoV-2, the virus has evolved to allow for easier human-to-human transmission. Experts are currently of the opinion that this is not the case.

Learn more by speaking with a qualified physician. Schedule your appointment today.

Monkeypox is a self-limiting illness that usually goes away in 2-4 weeks. There is variance in when an individual may get symptoms due to a virus incubation period of 5 to 21 days. When opposed to many other viruses, such as the flu, monkeypox has no noticeable symptoms in the early stages.

Fever, headaches, muscle aches, and swollen lymph nodes are some of the symptoms that patients may experience. After a few days, a rash appears on the face, then spreads to other parts of the body, including the palms of the hands and soles of the feet. Starting as macules (flat lesions), the rash progresses to pustules (raised lesions filled with yellowish fluid), and then to scabs, which gradually come off. These symptoms are similar to those of smallpox, but are milder, and most people recover without difficulty.

Monkeypox, however, can be dangerous, with a fatality rate ranging from 1 to 10%. The severity of an infection is determined by a number of factors, including virus strain, medical treatment availability, exposure level, and health state (e.g., whether a patient is immunocompromised).

The key to preventing monkeypox, as with all infectious diseases, is to reduce the possibilities of coming into touch with the pathogen. People should avoid contact with animals, dead or living, that may carry the virus, according to the CDC, especially in areas where monkeypox is a recognized problem. People can also be protected by learning how to handle potentially infectious animals properly, which is especially important in areas where the bush meat trade is common. Following standard hygiene procedures (e.g., handwashing) after coming into contact with a sick/potentially infected person or animal is an effective mitigation strategy.

Vaccines, in addition to the aforementioned behavioral measures, are effective instruments for preventing and lowering the severity of viral infections. The smallpox vaccine, according to the WHO, is 85 percent effective in preventing monkeypox. Though conventional smallpox immunization is no longer practiced, the US Food and Drug Administration (FDA) has licensed a live-attenuated vaccine, trademarked as JYNNEOS, that protects adults 18 years and older against infection with smallpox and monkeypox. The United States has ordered 13 million vaccination shots to keep on hand as the outbreak in 2022 progresses.

Monkeypox does not have a specific therapy. Treatment plans are frequently focused on reducing symptoms and making patients as comfortable as possible. Nonetheless, there are a number of antivirals that may be useful for monkeypox and that the CDC has approved for use in a monkeypox outbreak. In the United States, Canada, and Europe, tecovirimat (TPOXXTM) has been approved to treat smallpox. TPOXXTM has been approved for both oral and intravenous delivery as of May 19, 2022, extending its potential applicability.